Originally from Texas, Natalie has taken a few different paths in her life, “My background is a little all-over. I studied design in college, but I never fully committed to that route. I went to Carnegie Mellon, which was a great school, but you know, life often takes you in directions you weren’t expecting. I worked a lot of customer service type jobs, but also did some front-end work. Mostly just HTML, CSS, nothing too involved with javascript, so I would say I had a little programming background but overall it was pretty minor. When I moved back to Texas after living in Oregon for 14-years, I started managing a coffee shop, but then almost right away the pandemic hit. With not being able to work, I had an opportunity to really seriously consider what direction I wanted to take my life and I started considering doing a coding bootcamp. I looked at different programs and then finally found Sabio. When I also realized I couldn’t actually find anything bad about Sabio, I took that as a sign that I should do this.”

One thing that always drew Natalie towards coding was the idea of problem solving, “I feel like even my design education got me to understand that what developers do all day is problem solving. That is ultimately what made me decide to pull the trigger on Sabio. I had been utilizing a lot of free resources online, but I knew with my learning style, I mean, I’m in my mid-thirties, I haven’t been to a university in quite some time and I needed structure. I knew a bootcamp would help me have the accountability I needed for myself. One of the deciding factors for me in choosing a bootcamp of course was the cost.

I looked at a ton of different ones, and overall most of them seemed too good to be true. I could tell a lot of them depended on the cohort or instructor you had, but not at Sabio. I also loved that at Sabio the instructors were not recent graduates and all had real world experience. At the other coding bootcamps I looked at I connected the dots that most of them are taught by recent graduates, which I guess could be fine but that all depends on who you were getting. But the Sabio instructors, reading their profile and seeing what their experience levels were made me feel a lot more confident. I started doing the free pre-work lessons that Sabio offers and I was so impressed by Sabio’s co-founder and CTO Gregorio Rojas and his instruction style. I could tell he knew so much about what he was saying and he was so succinct about the concepts. I thought if I was already learning this much, I’m going to learn so much at the actual Sabio bootcamp.”

Unlike a lot of her peers, Natalie took the bootcamp part-time, “The classes were 2-3 days a week. Also, I’m in a central time zone and my partner and I spend a great deal of our time taking care of our daughter who is 6 ½, so I was so grateful to be able to do this part-time. I would usually get up early, take my daughter to school, come back, get caffeinated and start the day. We had stand-up every day that I was in session, but I was also able to go at my own pace which was really nice. I’m lucky my husband fully supported the time I needed to do this, because even those two days a week were very time consuming. I got really good at being able to google stuff on my own, especially because of the break in-between lessons. With all the research material Sabio provides, I was able to learn how to problem solve a lot on my own, which I think is a really great skill to have as a developer.”

With doing the bootcamp part time, Natalie got to enjoy a smaller cohort, “Once we started warming up to each other, we became great resources for each other. Also, once we started working on the real-world project together, we got great at communicating. Funny enough, the job I had now I got through a referral from someone in my cohort. They told their recruiter about me, and now we work at the same company. The Sabio instructors were also amazing at explaining things to us. At first I feel like I was a little timid about asking for help, but then I got more courage, especially because no one ever made me feel like I was asking a stupid question, which I think is really important. For answers, they assessed whether they should point you in the right direction versus just giving you the answer. So for smaller things like to use a quotation or semicolon, they’d help you not get hung up on it, but if it was a concept, they’d give you a clue but then you had to figure it out on your own. I think that’s a big skill because not everyone is necessarily good or even receptive to that, but you have to be to succeed as a developer.”

Now a fullstack developer at Optum, Natalie is loving her full position, “I graduated at the beginning of December 2021 and I got the offer sometime end of January/beginning of February. 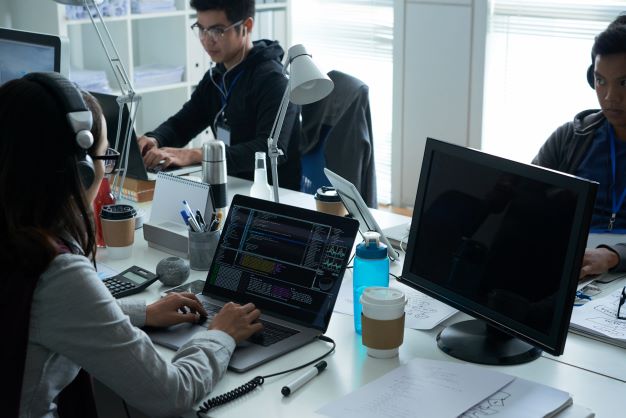 I was really surprised by that timeline, mostly because I didn’t know what to expect. Some people had jobs lined up right after graduation, but everyone in the part-time cohort didn’t, because we had other parts of our lives that necessitated attention. Then of course the holidays happened and all that stuff, so I kind of anticipated it would take much longer then it did. The interview process was pretty quick, but I might have been expecting the worst. I initially said I’d give myself 3-4 months and there I was with a job not even two months out.”

Natalie attributes much of her quick success to Sabio’s training, “The mock interviews we went through towards the end were really great. The interview questions, study guide, they were incredibly helpful. But, true to form, none of them gave us the answers to the questions, we had to find the answers in our own words, which I think was very helpful. That way in interviews you’re not just rambling off a definition the employer has potentially heard somewhere else. My job now is also very similar to the entire structure at Sabio. Also, just the training that Sabio gave me on how to frame a question, how to recognize issues, it’s all a similar environment. Sabio really has helped me get answers for myself quicker and be a better worker.”

Even though she’s just getting started, Natalie is so excited for her future, “Optum is a huge company so there is a lot of room for growth here. One thing I really liked was when I was talking with a recruiter at the technical screening interview he said this would be a good opportunity to learn from developers who have a ton of experience. It’s great because I can seek out mentorship from people here unlike at a scrappy start-up. I do hope to eventually do some front-end work, especially with my design background, but as long as I’m learning, I’m open to any opportunity. Our entire family life has changed now because of the financial stability my job provides. I was managing a coffee shop before this and I think the most I’ve ever earned is maybe only half of my salary now, so that’s a huge thing for us. It just takes this weight off your shoulders when you don’t have to worry about that. Also, just the mental shift of being able to do a job that isn’t totally physical. It’s given me hope and the ability to believe in myself. When I look back on when I was considering a bootcamp and the ambitions I had for myself, those seem obtainable now. This has given me a fresh start and I can think about things and seriously consider them for my family and my daughter, I’ve never been in a position to do that before.”

For those interested in learning to code, Natalie says, “I can’t recommend the PreWork enough. It’s so valuable because it allows you to see if this is something you actually want to do. There’s a ton of buzz happening around bootcamps right now and marketing making it seem like it’s this easy three month transition. And it can be three months, but it’s really hard. With PreWork, you can get an intro to coding and also dip your toes in the entire Sabio experience. If you think that’s fun and challenging, then Sabio is the right choice for you. I also tell people about their women in tech scholarship, because I know I wouldn’t have been able to afford Sabio if I hadn’t had that. We need more women and brown people in tech, and even that Gregorio and Liliana Monge are Latino also, that was really important to me. I could tell that they were genuinely invested in their mission and that it wasn’t just a business for them. Coding is really hard and really challenging, and Sabio does not try to sell a quick and easy diary model at all. They teach you so much. I’m still surprised at how much I learned when I was there. I’ve met other people who have done other bootcamps, and they definitely don’t learn as much as I did at Sabio. No matter how many doubts that I had along the way about my capabilities, now that I’m in the industry, Sabio has exceeded my expectations in every way. It’s amazing.”