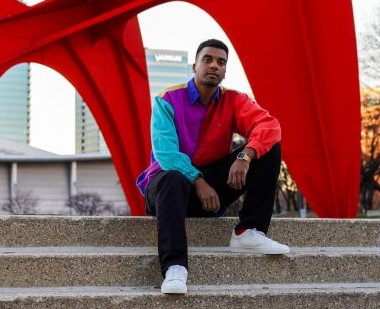 Starting off in the Marine Corps, Pierre is no stranger to a challenge, "I began mainly digging cable trenches and dealing primarily with telephones and voice protocol phones. But I was able to work with the administrators, learn what they did and ended up getting out of the Marine Corps as a system administrator. I did that for two years, but I was just getting bored with the whole aspect of maintaining things and waiting for stuff to break. I quit my job and went back to school, but started also looking for bootcamps that were covered by the GI Bill. That's how I found Sabio and after talking to Liliana Monge (Sabio's Co-Founder and CEO,) I learned that through VET TEC I could basically do the whole thing for free. I knew I had to take a chance and do it."

However, it wasn't just the price tag that got Pierre hooked, "One of my friends is friends with the owner of Hackreactor, so he really pushed me on that. But I got this feeling from Sabio that they really cared which I did not get from Hackreactor. At the Sabio orientation I met one of the instructors, Jack Nehme and I felt really comfortable working with him. The other big draw of Sabio was that you get hands-on experience with real life projects. I didn't know it then, but my cohort would end up working on a project for the city of Los Angeles which was really fortunate."

Even though he didn't know how to code, Pierre wasn't nervous, "I think a lot of people believe that to be a good programmer you need to know math or be the smartest Harvard dropout like Zuckerberg, but that's really not the case. Sabio takes folks who know little or no web application knowledge and turn them into professional developers. I mean, I love my job now and I'm making 50k more a year off the bat, this is like a dream come true to me. But it wasn't simple, I definitely worked very hard and really wanted it. I think that's pretty much key to being successful at Sabio, you've got to really put in your time and you'll get out what you deserve."

Despite the hard work, Pierre still had an amazing time, "My cohort was like a family. At Halloween everyone dressed up, it was great. I loved the people that I was next to. Everyone had the same dreams and aspirations of being a programmer which really propelled me forward. Everyone wanted to help each other and be the best coder. My instructor Brijesh Patel was amazing too and worked super hard. Our project had to be fully functional by the time we were done with it because the Demo was going to be turned around and put into use by the city. All of the instructors were great. Gregorio Rojas (Sabio's Co-Founder and CFO) was a little tough on me, but I'm glad he was. That really pushed me to do the best that I could, he wanted me to be successful and that's probably one of the reasons I got a job immediately post Sabio graduation. He pushed me to be a better programmer and have the best practices for coding, making me think about every line before I even put it on the screen. He's definitely the best programmer I've ever seen."

Now a Sabio graduate, Pierre has made some exciting career moves, "After working as a SharePoint Developer with Loyal Source Government Service in San Diego, I really liked my job and actually wasn't even looking for another one. However, in early 2021, Liliana reached out to me through Slack telling me about this software development apprenticeship with Amazon and suggested I give it a shot. I remember thinking, 'I don't know if I can make it, this is one of the top companies.' But I thought, I might as well just give it my all. I studied very hard and started finding that a lot of my past experiences both working in the Marine Corps and as a software developer really fell in line with Amazon's leadership principles which led to me getting a job offer from them almost immediately."

It wasn't just his skills though that landed him the position, "Sabio teaches you these interview techniques that I feel really prepared me for the interview at Amazon. There's a certain way to go about it when you are not as experienced but you also need to sell yourself. Sabio really teaches you how to harness your strengths and capitalize on your personable skills. Amazon also talked about this format that you get out of Sabio too called, 'situation, task, action, result.' I actually spend time mentoring Sabio grads now too and always emphasize these techniques. I really want to give back to Sabio, they gave me so many marketable skills in just 3-4 months which is crazy. One of my biggest accomplishments this year was getting a guy I knew from middle school into Sabio and then into a job. He said his life completely changed for the better, it was amazing."

Having just gotten the job at AWS, Pierre is eager to get started, "The first 18 weeks we're going to be learning about a good amount of different services and program languages like Java. After that you have 18 weeks of job training at a location of your choice, I chose Sunnyvale, CA. I want to be able to make my own company one day and the Lambda & server skills you learn/practice at Amazon are very much going to help me do that. Additionally, I'm going to be taught machine learning which I feel is definitely the future. People get very scared because they think robots are going to take our jobs, but software development can't be done by a robot, that's the stuff that actually will make a difference in the world. My family does the factory work, the assembly line stuff and that is not going to change the world. That's why I got really interested in AI and machine learning because there can be jobs that can only be filled by actual people, engineers and stuff like that while still being part of the tech revolution."

Pierre couldn't be more grateful for Sabio's help, "They changed my life, truly. Before Sabio I didn't really have much, I was scraping up money just to ride the metro to Sabio. When I was there I really grinded hard and then was able to get a decent paying job which just opened doors for me. Without Sabio, I have no idea where I would be at. They changed my life for the best and I feel like they allowed me to become successful. There's such a community there with tremendously worthwhile job training that you get while you're learning."

For those looking to learn to code, Pierre says, "If you like building stuff and helping people out for the better of the world, code is the way to go. Going to Sabio is great too because it's streamlined and you're meeting people who have the same goals as you. If you take initiative and get some training, you're going to succeed and being around the right people while you do that is supercritical. This kind of ties into Amazon because it seems like they're trying to cultivate the right people for success too. What's key there is most of their principles start with the word, 'leader,' or 'leaders do this." I feel like they're taking a great step to source all these great employees because when you get out of the military you have all these skills that just go un-utilized and untapped. Amazon is very much tapping into this pool of talent which is good on them. I truly appreciate Amazon and what they are doing here with hiring qualified veterans to be software developers, project managers, cloud developers, it's great for the veteran community and I truly appreciate it.