Mariana's life has completely changed thanks to Sabio coding bootcamp 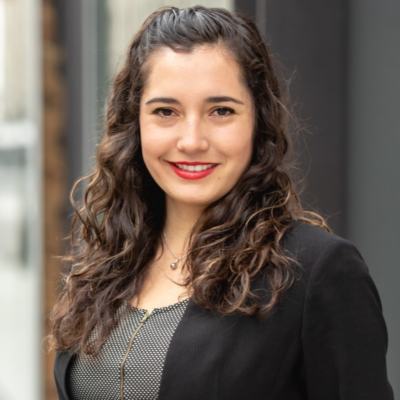 A recent transplant to the United States, Mariana has always worked hard to get to where she is going, “I’m from Mexico and actually studied international relations which led me to a lot of cool places, but wasn’t really doing that much with my career. Then in 2019 we moved to LA for my husband's job but it was really hard for me to find employment. I had done management, organizational development, worked as a strategist and employers loved my background, but then when they found out I didn’t have that much experience working in the US I would get the very nice, ‘Okay great, we’ll call you later!” and then they would never call. With no other options, I started working in telemarketing strategy, but that kind of felt like a waste of time and wasn’t fulfilling. One day I was going through social media and came across tech bootcamps so I thought, why don’t I check that out?”

As Mariana did her research she learned about all of the different bootcamp options, “I went to many different boot camps and their meetups. I tried General Assembly, Coding Dojo and then Sabio which really stood out to me. I met with Gregorio Rojas (Sabio’s Co-Founder & CTO) and I really liked how straightforward he was with me. I asked him if when I finished if I could get a job at google or something like that. He explained to me that it might take a little more time then right away because you’re just learning the basics and need to grow your skills, but that you can get there if you put in the work. I took Sabio’s PreWork which I really liked and I also liked how strict they were about how you had to be there from 9-9 every day because if you’re going to change your future, you have to put in the effort. Also, the fact that you’re actually working on a real world project and learning the languages that will get you a job was very appealing. Now that I’m in the workforce, I’ve learned that they were right. Going to Sabio is exactly like a normal day at work. My cohort was amazing and really nice. Anytime anyone ran into a problem, someone was on the phone with you helping you fix it. We really were helping each other in every way we could. The teachers were also amazing and always willing to help.”

Now a full stack developer, Mariana is thrilled to have gotten a job as soon as she could, “I’m a full stack developer at West Coast Dental which has 42 locations in California. Right now we’re building an application which is going to help automate everything. Now we’re building this interface that is going to streamline that. The whole thing is a really fun learning experience!”.

Even though she got the job on her merits, Mariana also credits Sabio, “Liliana Monge (Sabio’s Co-Founder and CEO) helped me with everything and really had my back. Sometimes it’s discouraging because you’re applying to so many jobs, but she is your cheerleader. She would say, keep applying! Do it now! I did, and I got this position. Sabio also gave me a mentor and set me up with classes that helped me talk about algorithms for the actual interviews.” Now that she’s kicked off her career, Mariana can’t wait for her future, “I want to continue learning. I love that, as a programmer, there is always the opportunity to learn something new. It could be a new tool, library, better ways to do something, there’s always something. Right now I’m working on the front end, but soon I’m going to be working on C# and to be honest with you, this is just the beginning. This world of tech is so amazing and huge and the team I’m working with is great. They’re willing to help and not only that, want to help. I’m trying to observe everything I can from them. It’s so great to get up every day and go to a job that I really want. It’s the first job I have where I’m not just sitting there bored and counting the minutes until I go home. Time actually

flies by. When I first started at Sabio I was scared and wasn’t sure if I made the right decision, but I would reach out to Gregorio and he would always say to keep pushing and give it time. Now, I’m making such a higher salary than I ever have, which is so fortunate because my husband is starting an MBA at UCLA in September. If I didn’t have a position as a full stack developer we might not be able to afford it, but after I finished the cohort and got this job, I feel like anything is possible if you just put a lot of effort into it.”

For those learning to code Mariana says, “If you feel like you would like it, just do it. It is a really hard and difficult path to take and can sometimes be really frustrating, but it’s amazing. It’s going to change your life and put so much motion in it, plus I feel like the people here in this field are nicer. I also want to give a huge thank you to Liliana because she gave me a lot of confidence that I never had before. Sabio has changed my life in such a positive way, I will always be grateful for them. It really seems like they’re not doing it for the money and they really care about the people. At Sabio it’s not just teammates, it’s like a family. Everyone is always helping each other.”